So, initially we got a link to some file. Downloading it and running file on it gives:

So at this point we know that it’s a 64bit ELF binary and it’s statically linked.

I then ran checksec on it to see what protections were enabled.

So the only thing I had to worry about was NX being on. ie, the stack would be marked as non-executable so it wouldn’t be as trivial as somehow putting our shellcode there and returning into it.

However, earlier I found out that the binary was statically linked so hopefully I’d have access to a lot of useful ROP gadgets if I needed them.

Now that I had some initial information about the binary, I decided it was time to take a look at what it does.

I’m not going to describe this part in detail since it just involved me going through the different menu options and just playing with different values.

The interesting things I saw were that there was a minimum and maximum number of operations you could choose at the beginning.

There also seemed to be a restriction on the values you could use in the calculations. It complained when I entered small values and exited.

The last menu option “Save and Exit” also seemed interesting. What could this binary be trying to save? and to where?

Now it was time to look at the disassembly. I’m only going to include the interesting parts here:

From the disasembly of main:

Here we can see that it just reads an integer in via scanf after it asks for the number of calculations.

Here we can see that it allocates num_calc * 4 bytes where 4 bytes is the size of an integer. This definitely hints that the binary is storing the results of each calculation that we do. Let’s call the allocated memory, int *results;

Looking at the rest of it binary, it all seems very repetitive.

All of the operations are pretty much identical except for the instruction(s) for adding, subtracting, dividing and multiplying.

That takes care of menu options 1-4. Now to look at option 5 which was labelled “Save and Exit”.

Now things become very interesting. Here, the results from our calculations are being copied to a local variable inside of main.

However, the local variable is at rbp-0x40. That means that it is at most 64 bytes in length. However, we can copy num_calc * 4 bytes into it where num_calc can be as large as 255. Therefore we can copy up to 1024 bytes from our results to that location.

Let’s test this, keeping in mind that every calculation we do will count for 4 bytes. Therefore we need 20 calculations + 1 more for the save and exit.

Let’s do this in GDB / inspect the dump to ensure that we actually have control over RIP. 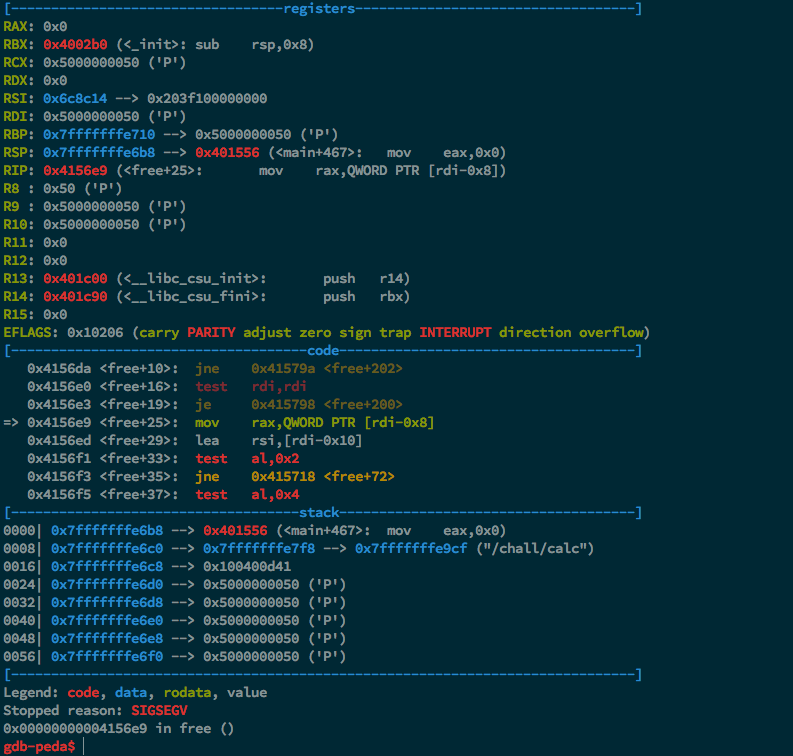 OH NO. Seems we don’t have control over RIP after all. After thinking about this for a minute, the problem becomes obvious. Remember our int *results from earlier? Since that was located at RBP-0x10, we’re clobbering the value when trying to overwrite the save return address.

Now, I was already familiar with how free() works at this point so I knew that clobbering results with a value of 0 would just cause free() to return and not cause a crash. However, it isn’t hard to deduce this from its disassembly either.

The only time test rdi, rdi would result in the ZF being set is if rdi was 0 initially. Therefore, free() exits if the argument passed to it is 0.

Armed with this knowledge, let’s try to get control over RIP again.

I used subtractions with 40 as both operands to get a value of 0 and I used that value repeated for the entire overflow. 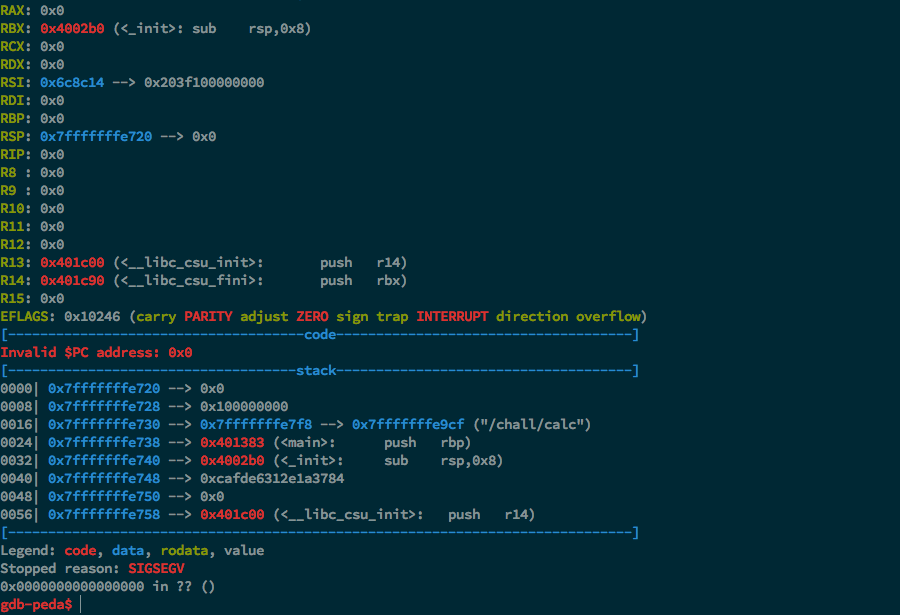 YAY. WE HAVE CONTROL OVER RIP.

Now that we have control over RIP, it’s time to pop a shell and read the flag. We want to use the execve (0x3b) syscall and we want to execute /bin/sh.

Knowing that NX is enabled, the stack isn’t executable and we’re going to have to use ROP.

Let’s try to set RDX first. When searching for ROP gadgets, a POP RDX; RET is available @ 0x00437a85. Let’s overwrite the saved return address with that.

Let’s picture our stack at the time of overflow right before ret has executed and we have control over RIP.

Therefore, when ret executes, it’ll place 0x00437a85 into RIP and continue execution there. It will then POP RDX, placing the next value on the stack into RDX (in this case 0x00000000) and moving RSP higher up the stack. The RET instruction following it is then executed, but we haven’t decided what to return to yet. We can place the address that we want to return to right above 0x00000000.

Therefore when the RET after POP RDX executes, it’ll then place 0x00401c87 into RIP. The POP RSI is then executed, making RSI = 0. The following RET instruction is then executed. What shall we return into next?

This part ended up being a little more complicated than the others.

I could easily place /bin/sh[NULL] onto the stack. However, how would we get its address into RDI?

Given that a CALL R12 was going to be executed, this means that I’d have to place the next address I wanted to jump to into R12 before we got to that point. I needed a POP R12; RET gadget and I found one at 0x00400493. It’s important to keep in mind that CALL causes the address of the next instruction to be pushed onto the stack as the saved return address, essentially subtracting 8 from RSP, which messes up our layout a little. In addition to that, we never executed a RET meaning that RSP is another additional 8 behind where we want it to be.

Therefore, we want the address in R12 to point to a sequence of instructions which increases RSP by 16. However, when searching for a ADD RSP, 0x10 ROP gadget, I couldn’t find one. However, I did find ADD RSP, 0x8; RET and ADD RSP, 0x18; RET gadgets.

Finally we have RDI = addr of /bin/sh/[NULL] and our stack is in a usable state.

At this point, we have everything set up perfectly. All we need to do now is execute the SYSCALL instruction and our ROP chain should be complete and this should be able to give us a shell.

Now by abusing the subtraction operation in my python script, I was able to generate a sequence of operations that would result in the stack looking like what we’ve created.

The script really is terrible and hacky :p Ignore that.

And it works :D